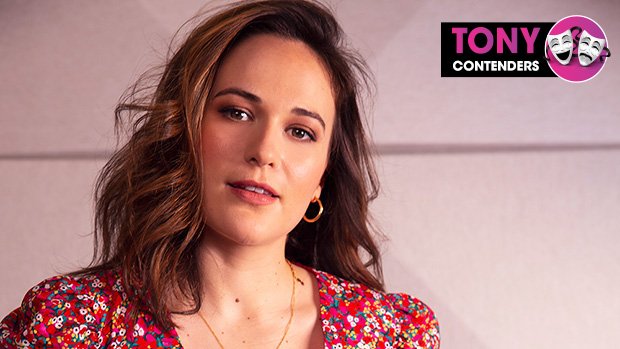 Arthur Miller’s tragic play ‘All My Sons’ is on Broadway with a message that continues to be relatable in our current political climate. Actress Francesca Carpanini reveals how she gives her character a modern update.

All My Sons has been met with rave reviews since it’s Broadway revival, just in time for Tonys season. The show nabbed three Tony noms, including Best Revival of a Play, and in turn, extended its Broadway run to June 30 at the American Airlines Theatre. Francesca Carpanini plays Ann Deever, the ultimate truth-bearer in the play who is often referred to as the ‘pretty’ and ‘beautiful’ “Annie.” Francesca spoke to HollywoodLife.com about bringing the 1940s woman to life with her own ‘smarts and wit,’ plus what it’s like to work opposite of the legendary Annette Bening!

HollywoodLife: You’re in an Arthur Miller production on Broadway! How incredible is that for you?

Francesca Carpanini: It’s amazing, it’s the kind of thing that makes you want to be an actor. It’s the kind of play, role and cast that you dream of. To be doing this play at this time feels really important and a true honor because as a country, we are really searching for who we are and I feel like this play attempts to tackle those questions of integrity, honor and corruption. So every night, I feel like I’m telling a story that’s actually important to the people who are in the audience.

HL: Doing a deeper reading into this show, did it help you get a better understanding of the real message Arthur Miller was trying to get across?

HL: Tell us a little bit about your character Ann and what she adds to the show.

FC: I play Ann Deever and I’m sort of the catalyst for pretty much everything that happens in the play! I come back to my old neighborhood to marry Chris, who’s played by Benjamin Walker. I was the former sweetheart of his brother, who went missing during the war for the three years. That causes a lot of drama in the family because for me to marry Chris would be accepting that Larry, his brother, is dead. I think Ann is a real truth-teller in the play and she kind of brings the final message that, unfortunately, leads to the play’s tragic end.

She also is a incredibly strong female, she knows what she wants, she’s not afraid to ask for it. I think it’s pretty incredible that Arthur Miller wrote this character in 1947. She’s not just a wall flower, she’s not just some sweet ingénue — she has brains, she has humor, she has smarts and it’s a real honor to get to play that every night and to not shy away from those qualities. I think we sometimes have an idea about older plays or the ’40, the ’50s, of women being sweeter and softer and kinder. It’s just not true. People fought and women fought and women laughed and people laughed. Women still had strong, bold personalities and went after what they wanted.

HL: I love that. How do you portray Ann every night in a way that leads the audience to the tragic ending without giving away that you know the ending?

FC: That was definitely one of the most difficult things in the rehearsal process for all of us. We kept asking the question, “Who knows what and when do they know it?” It’s very hard to navigate that. I start at the beginning of the play in the most positive, hopeful place I possibly can. That is the trick I found to make sure that the ending packs a punch because you can’t come in having any idea what’s going to happen. I have to come in thinking, “I think this is going to go well. I think I’m going to marry this man, I’m going to marry the love of my life and I’m going to be accepted back into this family that I love and have cared for and that is truly my everything.” Really trying to play the positive and push off the negative as long as possible, is the most essential thing.

HL: Because this is a revival and an Arthur Miller play, do you approach your Ann any differently as to alter the audience’s beliefs they may already have of her?

FC: I think what is interesting, is that not as many people know this play as you would think. A lot more people actually don’t know the play than do. Either they read it in high school, and they’ve forgotten what happens — it’s not like Death of a Salesman or The Crucible. So,  that’s really exciting actually to perform it and that people are very surprised by what happens in it and hopefully moved.

I actually worked on the play when I was in school, at Juilliard, my first year and I recently went back before my audition to look at the notes I’d taken in class. My teacher had said to me, “Ann does some pretty fucking incredible things in this play, Francesca, so don’t play her like some wallflower.” And that stuck with me and I don’t think I would have gotten the part, had I not worked on it then with him because that simple thing allowed me to not be scared or softened by the period or my ideas of a 1940s girl. I just was like, “Let me bring my own smarts, my own wit to her.”

HL: What is it like working with Annette Bening?!

FC: She’s wonderful. She’s so warm, she’s so funny and she really teaches me about being alive on stage. There’s never a point when she’s done working or discovering or asking questions. That is incredibly inspiring to be around because right when you think, “Oh, I think maybe we’ve gotten this scene,” she’ll ask another question that just opens up a whole new world of possibilities. She’s a true excavator of the text and just inspires me to go deeper and deeper.

HL: What are your thoughts on justice? It’s a central theme in the play and, as you pointed out, incredibly prevalent right now.

FC: I think that every single day, right now, in this country we are thinking about that question. We are thinking about what is the best course of action for us to feel like the wrongs that are being done to the American people, whatever you feel those are, are going to be properly atoned for? I think that is the question of our time and that’s a question that Arthur Miller is asking in this play. Just because you ‘get away with something,’ does that make it okay? No. How many people’s lives have to be ruined for your actions to matter and to deserve punishment?

I just pray to God that in our next election that we elect people who are able to hold our leaders accountable for the ways in which they’re neglecting the people they’re supposed to be serving.

You can buy tickets to see Francesca, Annette, Benjamin Walker and the rest of the incredible cast in All My Sons at the American Airlines Theater for a limited engagement.