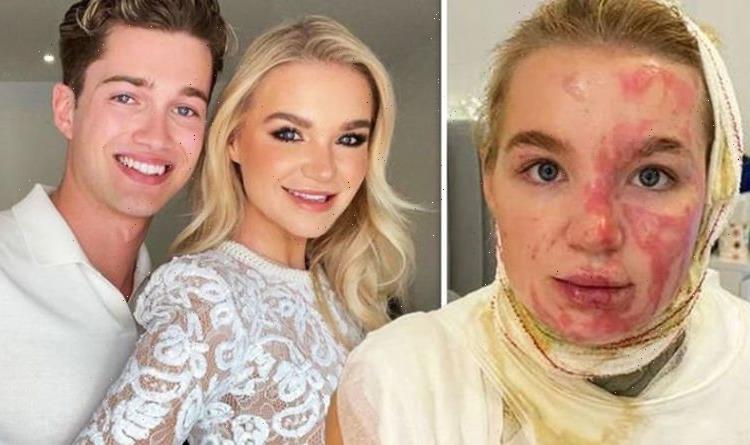 Abbie Quinnen recalls looking at her injuries after accident

AJ Pritchard’s girlfriend Abbie Quinnen has revealed that she felt “awful and insecure” following a horrific accident which left her with third degree burns and some of her hair burnt off back in May. The model, 24, was filming a TikTok video with her former Strictly Come Dancing star boyfriend AJ at the time of the accident, using a rope dipped into a flammable chemical substance to turn a glass bottle into a vase, which ended up setting Abbie on fire.

In view of her 89,200 followers, the dance professional revealed that she is finally starting to feel more confident again, as she showed off her transformed tresses five months after the horrific accident.

Clasping a tub of hair vitamins, Abbie gushed over the popular supplement while showcasing her lucious new locks.

The model wrote: “I cannot tell you how much my hair has drastically changed taking these tablets!

“I honestly felt so awful & insecure about my hair after my hair got burnt in the fire & after taking my hair extensions out it left my hair so so thin & broken!” (sic)

Abbie continued: “I saw the hair and energy tablets on an influencers story & I thought I had to give it a try!!

“You can see for yourself how amazing my transformation was I am [five] months in & take them every day!” Abbie continued to gush.

“I will honestly never not take them now,” the star ended the post, which she had marked as an “#ad”.

Boasting freshly highlighted shoulder-length hair, Abbie wore her light blonde tresses in soft waves down her back as she grinned happily in the snap.

However, the next snap painted a very different picture of the damaged state of Abbie’s hair following the accident.

With her hair pulled into a high ponytail, the star bravely revealed that a section towards her neck had been “burnt in the fire” and as a result, was visibly shorter than the rest.

Posting another snap of her hair today, Abbie revealed how the section of hair had become healthier and thicker as it grew back after being burnt.

Earlier in the year, Abbie suffered third degree burns due to the life hack stunt she filmed with her former Strictly pro boyfriend AJ.

But the trick went very wrong when Abbie suffered injuries to her face, head, neck, ear, chest and down her right side.

She also ended up losing some of her hair and after the accident, said that she felt “hideous” after seeing her reflection in her phone screen.

Abbie revealed that it was difficult to come to terms with her injuries after the second and third degree burns left her needed skin grafts.

The dancer confessed one of the hardest things for her to come to terms with was worrying that she would never look the same again.

“When I was in hospital, staff tried every day to persuade me to talk to a therapist, but I just didn’t want to, I wasn’t ready,” she said.

“Even looking at the reflection of my face in my phone screen was hideous.”

Abbie recalled being “hysterical” after she eventually spoke to a counsellor who encouraged her to look into a mirror to help her accept what had happened.

“I think when it happened I was just thinking the worst, my face is never going to look the same again, I’m always going to have scars on my body,” Abbie said on ITV’s Lorraine back in May.