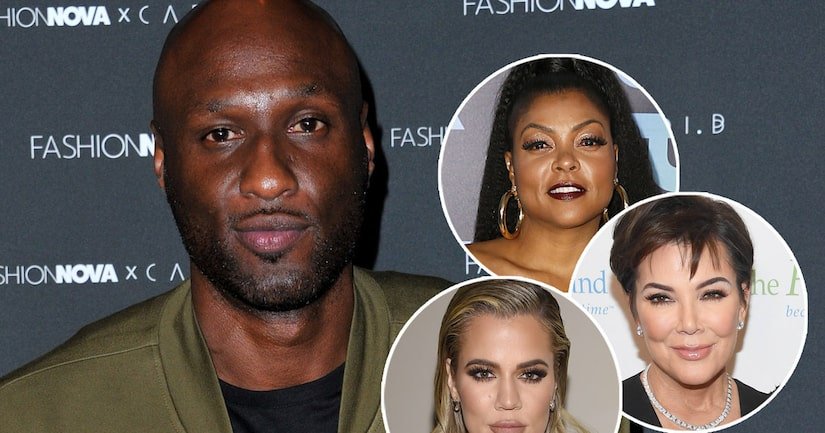 Lamar claims Khloe “beat the s–t” of out one of the women he cheated with and accuses Kris Jenner of setting him up on camera.

Lamar Odom released his tell-all memoir, "Darkness to Light," on Tuesday, which chronicles the athlete’s rough childhood, rise to fame as a basketball star and his near-fatal struggles withboth drug and sex addiction.

Throughout the book, he also dropped a lot of stories about a few of the famous faces who have come in and out of his life, including ex-wife Khloe Kardashian, her entire family, ex-girlfriend Taraji P. Henson, Kobe Bryant and owner of the Mavericks, Mark Cuban.

Cheating is a common theme throughout the memoir, as Odom reveals he cheated to get into college, wasn’t faithful to any of the women in his life and even went to extreme lengths to fake a drug test to get onto the Olympic basketball team.

The book is available now, but we’ve broken out nine of the most shocking revelations below.

Odom said he was never a "good test taker" and had problems studying during his high school years. While his athletic skills would help him get into college, he needed the grades too.

According to Lamar, a man named Pastor John Massey Jr. was paid $15,000 to change some grades on his report card to As and Bs. But when he saw his transcripts, they were filled with Fs — "I had been had," he recalled.

He also revealed that someone else took the SATs for him, "to ensure my college eligibility." The only problem: the guy did too well and it raised suspicions. His scholarship to UNLV was rescinded.

After his beginnings at the Clippers, Odom was drafted by the Miami Heat. With that move came a brand new six-bedroom, nine-bathroom home, which he christened on one huge party attended by "every stripper, groupie, and side piece" he and his friends knew.

When Odom was recruited to play for the US team at the Olympics in 2004, he was also required to take a drug test. "There was absolutely no way I was going to pass," he recalled, "I’d been smoking weed every day that summer."

The solution: "We ordered a giant rubber black c–k to arrive the next day."

Odom’s trainer, Robbie Davis, then urinated into the fakey just before the test was administered, with Lamar then strapping it on and peeing into a cup. It worked.

"I’ve had sex with more than two thousand women," begins one chapter in the book.

Odom went on to say he doesn’t remember most of their names, said many were "one-night stands" and included "too many strippers to count." Lamar also said he would "often" leave $2,000 on the nightstand in the morning after a hookup.

"Most of my sex had been unprotected, and I’ve paid for plenty of abortions over the years," he added. "I’m not proud of it. It’s the law and legal, but I don’t feel proud about it at all. I am a sex addict."

His Relationship with Taraji P. Henson

In 2008, Odom met Taraji P. Henson at a party in Hollywood and they clicked immediately. "She was just such a wise woman that she could see right through whatever smooth act I was trying to put on," he recalled. "She refused to be just another conquest, and truthfully, I didn’t want her to be."

They quickly became serious, sharing dinners with Brad Pitt and Angelina Jolie and attending parties at Prince’s house … but Odom found himself "back to my old ways," cheating on her.

"I felt guilty, but I was craving immediate sex," he said. "We continued to spend a lot of time together, and she was a big part of my life, even though I wasn’t being faithful to her."

The two broke up after he wouldn’t go to China with her while she filmed "Karate Kid," worrying that he wouldn’t be able to feed his cocaine addiction while there.

Lamar and Khloe Kardashian married just a month after meeting each other in 2009, with Odom saying he was "taken aback at how close-knit" the entire Kardashian family was. As their relationship progressed, however, so did his reliance on "hard drugs."

High on coke and ecstasy, Odom was beyond paranoid in his man cave one day, and starting making holes in the walls, believing there were microphones hidden. Khloe freaked and called one of his friends.

When Khloe eventually came down again and knocked on the door, Odom said, "I opened it suddenly and grabbed her forcefully by the shoulders, which frightened her." He screamed at her, "You trying to embarrass me in front of my friends? I’ll f–king kill you! You don’t know what I’m capable of!"

Odom said he "had broken my vows with Khloe so many times" before she started checking his Black Card statements. One night, she tracked his movements to the Hotel Roosevelt in Hollywood, where he was shacked up with two strippers and a lot of drugs.

Around midnight, there was a "pounding" at the door — and on the other side was Khloe, Kris Jenner and their security team. "Khloé opened the door and pounced on the first girl she saw," said Lamar.

"Try to imagine the scene: Khloe’s beating the shit out of one of the girls who tried to protest. She’s dropping vicious blows all over the top of this girl’s head," he claimed. "Kris is screaming and her security guard jumps in and pulls Khloe off the beaten stripper. Khloe tells me to gather up my things, and the guards quickly remove all traces of the drugs. We sneak out of a back door of the Roosevelt and disappear into the night."

As their marriage fell apart, Lamar claimed Kris called him saying Khloe wanted to speak with him after a SoulCycle class. But when he approached Khloe outside of the studio, she had no idea what was going on and photographers were there filming the whole incident.

"It had to be Kris," he said. "Kris knew this was my last chance, but she didn’t want a drug addict in the family. It wasn’t good for business. Any chance I had left with Khloe exploded on the spot."

He added, "It was always about her brand. I was nothing to her."

Lamar wound up at the Love Ranch, a Nevada brothel, following the fallout with Kardashian. It was then, after a four-day bender, he was hospitalized after an overdose. He would suffer 12 seizures and six strokes.

Khloe, Kim Kardashian and Kris quickly flew to the hospital to be with him, with Khloe calling all the shots since she was still, technically, his wife. This lead to a showdown of sorts between the Kardashians and Lamar’s family, who refused to sign non-disclosure agreements Odom said Khloe approached them with.

"In the middle of the chaos, they were still trying to protect their brand," wrote Lamar.

He did praise both Khloe and Kim for never leaving his side while he was unconscious. He went on to say he is happy for Khloe and Tristan Thompson after the birth of their daughter, True, adding that "she will be an amazing mother."

In the Acknowledgements section of the book, he also called Khloe "the love of my life" and said he wished he "could have been a better man." To her family, he added, "Thank you to the entire Kardashian family for embracing me and giving me an incredible kind of love. I will always be ‘Lammy.’"

"Darkness to Light" is available now.