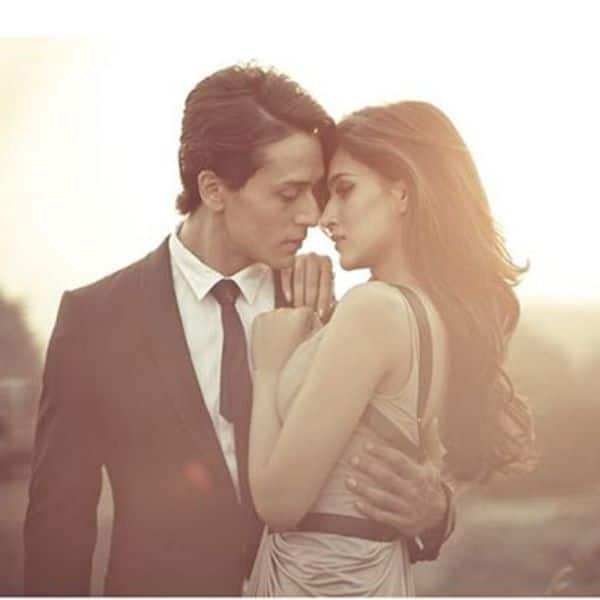 It’s amazing how time flies! Look at Tiger Shroff, it’s been 5 years since he entered the industry with Heropanti alongside Kriti Sanon. It seems just like yesterday when the young heartthrob was seen delivering lines like ‘Sabko aati nahi, meri jaati nahi’ and look at him coming a long long way with hits like Baaghi and its sequel and big projects under his belt. Kriti, on the other hand, is also doing a fabulous job with content driven scripts and power pact acting. Both the actors received a warm welcome from the industry folks as well as the Janta. And, today which marked 5 years of their debut film’s release, the actors took to their respective social handles to wish each other and celebrate this happy occasion.

Just a few hours back we reported Kriti’s adorable post for Tiger Shroff, in which she said that she will always have a soft corner for Tigy (Tiger’s pet name, given by Kriti, cute isn’t it?). And now, Tiger has taken to his social handle to wish his ‘partner in crime’. Sharing a series of pictures from the photoshoot during their film’s release Tiger gave a charming reply to his former leading lady. His caption read, “Happy anniversary to my partner in crime in this whole crazy journey! so grateful that i started my journey with you and shared some of the best experiences and so many firsts with you! So inspired and proud to see you grow from strength to strength…and yes…reunion offscreen before one onscreen! Lots of love always @kritisanon! ❤? #5YearsOfHeropanti.”Now have a look at his post here:

Happy anniversary to my partner in crime in this whole crazy journey! so grateful that i started my journey with you and shared some of the best experiences and so many firsts with you! So inspired and proud to see you grow from strength to strength…and yes…reunion offscreen before one onscreen! Lots of love always @kritisanon! ❤? #5YearsOfHeropanti

Kriti also took a jibe at the actor calling him super busy and teased the acrobat enthusiast to do a flip from his set to hers so they can have a reunion. She wrote, “Haha.. with you being super busy, i’m feeling onscreen reunion might happen first.. lol.. why don’t u do a flip from your set and land on mine.. ? ❤️❤️.”Have a look at Krit’s comment here: 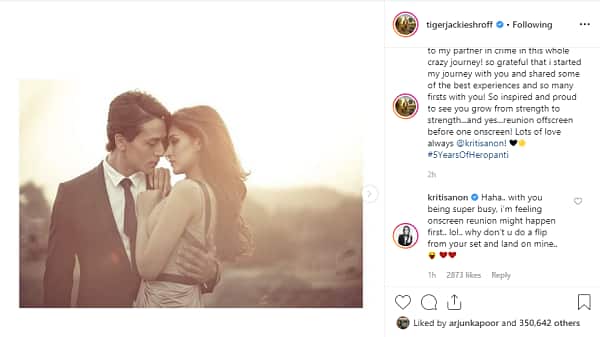 Heropanti revolved around a girl Renu, who elopes with her lover. Her father, Chowdhary, kidnaps Bablu who knows Renu’s whereabouts, along with two of his friends. But Bablu falls in love with Dimpy, Chaudhary’s younger daughter.

Meanwhile, on the work front, after a successful outing with Luka Chuppi co-starring Kartik Aaryan, Kriti has Panipat lined up with Arjun Kapoor. Tiger was recently seen in Karan Johar and Punit Malhotra’s Student Of The Year 2 with Tara Sutaria and Ananya Panday. He has a Siddharth Anand’s yet untitled film lined up alongside Hrithik Roshan.

Do you think they should do Heropanti 2? or some other film? let us know your thoughts by tweeting to us @bollywood_life…